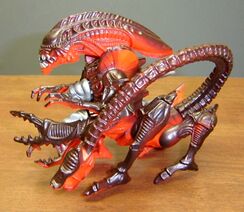 Yes,this is the first topic i made on this Forum,sorry for the bad topic that was deleted.Its gonna be a battle.I made it to celebrate Sigourney Weaver's Birthday!I know this battle is weird since two Xenomorph species are battling,you will notice why.

During a test on a spaceship,scientists put two Xenomorph species in an arena...

They weren't seen for a while,but,suddenly,the Aqua Alien came out with the Crab Alien's head!The Aqua Alien ran back to his contaiment cell.When he got out of the contaiment cell,he got inside a vent,and he went to kill the scientists...What could've happened?

21 Responses to The Killer Crab Alien Vs. Aqua Alien

By the way,this is what the Xenomorphs i chose look like: 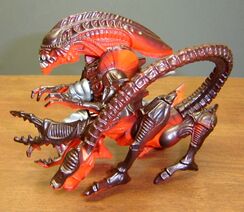 KENNER ALIEN TOYS! I always wanted these as a kid

I think its always Interesting to Speculate about the Xenomorph and especially as far as a Engineered Weapon.

Should I get into Alien?

I like the story of battling different xenomorphs and the winner going after its creators. Sort of a revenge/just desserts type story.

Kamoebas V.6  and Flyleaf-Rapt0r  I would encourage you to watch the Quadrilogy (Alien through Resurrection). It seems you are into action maybe and the xeno itself so I would actually recommend watching Resurrection first. There are themes in that movie that are similar to the OT story. (You might even see an aqua xeno of sorts lol!)

Welcome to the forum and expressing interest into the franchise- it's never too late to watch!

Side note. I am not familiar with the Aqua and Killer Crab. I would sort of expect the Killer Crab to win if fighting under water- that is where it would have its best mobility along with claws and the tail with its spear. Crabs don't generally do well on land but are quite swift and efficient in their under water element. The Aqua Xeno appears to not have any kind of exo skeleton or protection on its limbs, so the KC should be able to shred its flesh?

Actually, a crab can be formidable on land too. Imagine if it was bred with a xenomorph:

Thanks for the recommendations, DK.

But wait a minute... I just read a snippet of "Alien Resurrection"'s plot on Wikipedia, and I remember I saw it before when I was a bit younger with my grandpa and dad... and I'm scarred for life XD

I can try it again though, maybe I won't be as shook (Edit, NEVERMIND, I saw Prometheus, not Alien R. OOF)

Oh, it is awesome!

The Killer Crab Alien Vs. Aqua Alien sounds like a title of an Asylum movie.

It seems we may have to fear crabs after all. My name is Inigo Crabontoya, you boiled my father, prepare to die!

Never mess with the Crabontoyas dk.

Ingeniero I will never mess with them- I would only eat them with melted butter.

We recently speculated what it is that constitutes biomechanoid art, and I made a passing reference to crabs in some sense fitting the bill for a biomechanoid organism.

As a lad I had a crab exoskeleton in my bedroom, and I was awestruck by how its super-strong pincer could move, and the ingenious arrangement where it could fold the parts of its claw together to form a compact tightly locked shape. A brilliant design forged by nature that looks in some ways like an engineered machine.

I say bring it on. A xenomorph with crab-like features would be a welcoming menacing addition. There’s scope for some novelty.

You know the scene in Aliens where the xenomorphs begin unfolding out of the walls? That reminds me a little of how my crab’s claw could extend.

A crab Xeno could be interesting indeed. I would imagine its origin to be exposed to the pathogen kind of how the little grubs were exposed in Prometheus. Something like this would be great to explore in an off shoot movie ala AVP or even a mini series on a streaming service.

By the way Dk,i watched the quadrilogy as a kid,as a freaking kid!

AND THE CRAB ALIEN LOST!So why do you say that nobody should mess with him?

why do you say that nobody should mess with him?

Because sometimes it's fun to speculate and discuss- that's pretty much it.

Wait...what about a SPIDER CRAB XENO?! MY GOD I DON'T LIKE SPIDER CRABS....(But I like spiders themselves...god why am I so weird XD)

I caught a spider crab while netting dungeness once. Very creepy looking. I also caught a rat fish the same day- creepy as well and aptly named. Never know what will come up from the ocean!